In honor of that, we wanted to share some storyboard drafts, because DANG it's fun to look back at 'em ;)

When we wrote the initial script, we had a lot of very specific images/motions in mind, and had even filmed some sections live-action to get the framing down, but we had never actually drawn out all the scenes with the characters. Seeing everything together made us look at it differently -- later, seeing it animated made us look at it differently too.

We went through a lot of iterations with the Yotta team (who were very patient with our picky notes ;p ), and it's sort of neat to look at some of the things that changed from the older ones to the newer ones. In some cases, we needed to clarify better. In other cases shots with already-recorded lines got cut because of pacing or because they simply didn't work the same way in animation as they did in a table read.

Here's an older one and a newer one for your comparison pleasure! 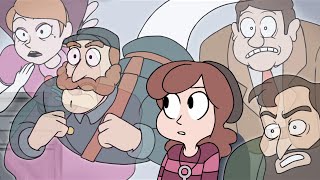